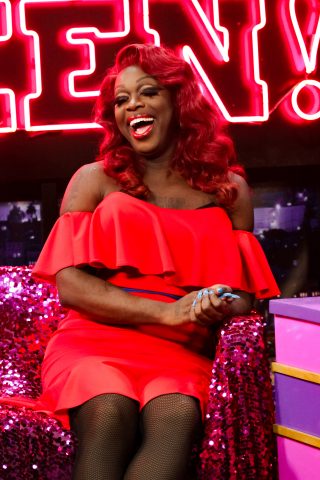 “RuPaul’s Drag Race” season 8 winner Bob the Drag Queen has made her way back to the glitter couch and ooh gurl, does she have a lot to say!

In a recent episode of the digital series, Hype & Influence, Bob chatted about the impact of drag culture and how it has found it’s way into the mainstream.

“Drag went from being referential to being the reference, which is crazy. People pull from drag culture because drag is the ultimate art form, and it is the last underground art form. Even clowns have college.”

“Deep down all performers want validation of their feelings and emotions and you really get that when you do drag.”

During her interview here at Hey Qween! Bob revealed how her life has transformed since her time on Drag Race and what she’s doing with her platform now as a part of pop culture royalty!

For more of Bob The Drag Queen, be sure to watch parts 1, 2 and 3 of her interview!

This week on Hey Qween! our guest is walking into the set purse first… that’s right, BOB THE DRAG QUEEN is here! The “RuPaul’s Drag Race” season 8 winner is back on the Hey Qween! couch and is ready to spill the T on everything she’s been upto since she snatched the crown.

Plus we’ve got an extra special treat for you, qweens! In celebration of Bob’s latest project, the web-based comedy series “Besties,” we have the stars of the show join in on all the fun! It’s a hilarious episode with an even more hilarious lap dance, that you just HAVE to see!

Watch part 1 of Bob’s interview below…