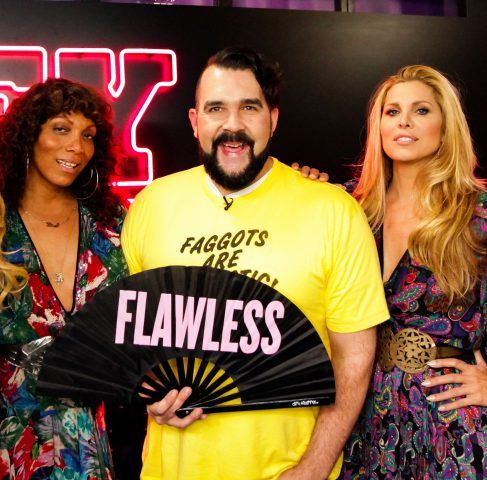 Trans icon Candis Cayne and her bff DJ Lina Bradford are the latest guests to arrive to the Hey Qween set and they bringing the fabulousness!

These superstar beauties may be big stars now, but back in the day these two used to run the New York nightlife scene. Whether they were turning looks at the club or walking runways for prize money, Candis and Lina could not be missed in the 90s.

“We met in the New York clubs in the early 90s, we locked eyes and basically knew that we were going to be friends forever,” Candis revealed.

In the 1990s, Manhattan was the place to be if you were a struggling artist looking to live like a rock star. Rent was reasonable and the nightlife was legendary.

“We’d get up around 10 in the morning and we’d go thrifting around the East Village and we’d look at pages of Vogue or Elle and recreate the looks,” Candis recalls. “Then at night, every night there’d be like three amazing clubs with amazing music.”

“We would do this show called ‘The Bitch Show,’ where we would wear these Mylar jackets on and we’d come down from the ceiling in harnesses in a space ship. We’ve probably done it like 3,000 times, but it was everything!”

“Back then you could do that in New York, but now it’s like forget about it, you need a trust fund and lots of coin,” Lina adds. “New York was built on artists, people come here with their dreams and now you really don’t get a chance to have that anymore.”

As many have brought up recently, the continual gentrification of New York City has been a mixed blessing. With new luxury buildings and safer neighborhoods does come a loss of that old time spirit and community. Candis and Lina, as well as host Jonny McGovern, all recall a much different New York.

“It was so colorful and fun and interesting back in the day and now it’s all so homogenized,” Candis says. “The East Village was so edgy and crazy and scary and fabulous and fun, but it’s different now. It’s still New York and it’s still amazing, but it’s not what it use to be.

For more of Candis and Lina, be sure to watch parts 1, 2 and 3 of their interview!

Watch part 1 of the interview below…