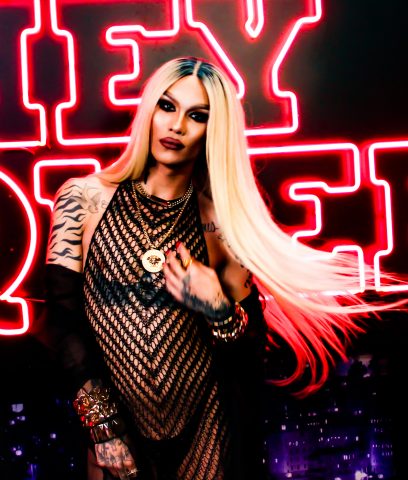 Things are getting gorgeous this week on Hey Qween! The stunning Kimora Blac is here to set the record straight on her time on “RuPaul’s Drag Race.”

For the short time that she was on the “Race,” Kimora left her mark with a number of memorable, maybe not favorable, moments.

One of those moments being a workroom meltdown involving the stoning of her garment.

“Look, I love stones and I wear stones,” Kimora reveals. “I don’t stone and it’s not because I’m lazy, it’s just because I really don’t know how. Like, I feel like I need to pop like ten Adderalls and second, it just takes too long.”

And when it came to cheer leading challenge that took out Eureka O’Hara and Charlie Hides, Kimora says it was a serious challenge that originally had her being thrown up into the air.

“It was awful, like it was awful and it was hard,” Kimora explains. “At that time I was super strong so me and Eureka we were like ‘Okay we are on a team we’re gonna catch our teammate because we wouldn’t want our teammate to fall.’ So I wanted to go into the air, but I had to think about my team and make sure we catch our teammate right.”

As for the challenge that sent her sashaying away, Kimora had this to say about the “Draggily Ever After” runway.

“Funky Monkey! I mean like my story was cute,” Kimora says. “The costume that I sewed just didn’t look good with padding and I couldn’t cover like the lining and it was just too much. It threw me off because I had hair on my legs, did not shave, it was either I was going to shave dry or I’m just going to hope for the best.”

When it came right down to it, Kimora believes that if we were talking purely out the runway look, she shouldn’t have been the one to head home.

“Farrah Moan was on my right and Aja was on my left and I felt, I mean, this is just my personal opinion but I felt like my outfit looked the best. Like I mean no T, no shade. Farrah didn’t really sew, I don’t really sew, but I know how I just choose not to, and Aja she sewed but her jacket was like half.”

“But I mean I feel like I was only up there because of my bananas and Michelle was like ‘You don’t have real bananas.’ But where the hell am I gonna get fucking real bananas? Girl, come through,” she adds.

For more of Kimora, be sure to watch parts 1, 2 and 3 of her interview!