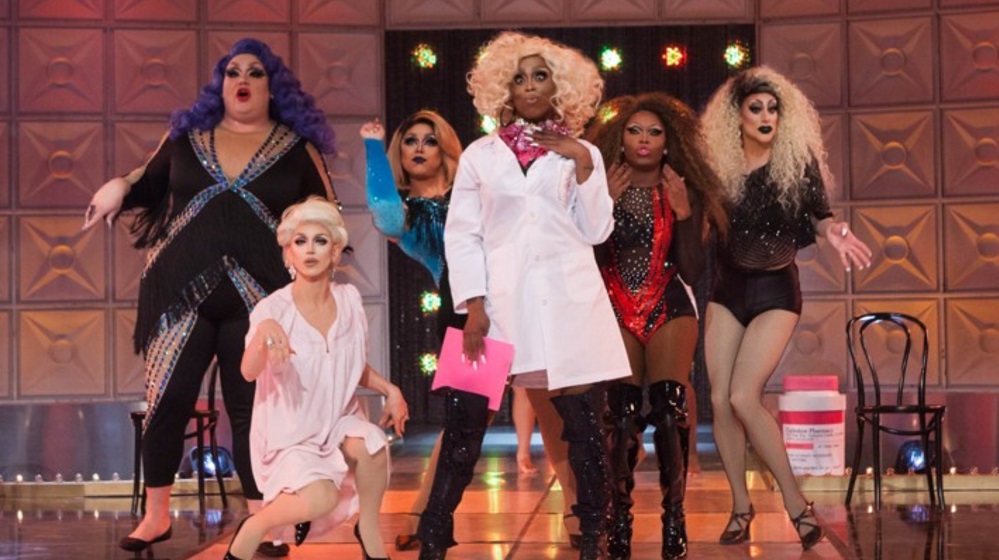 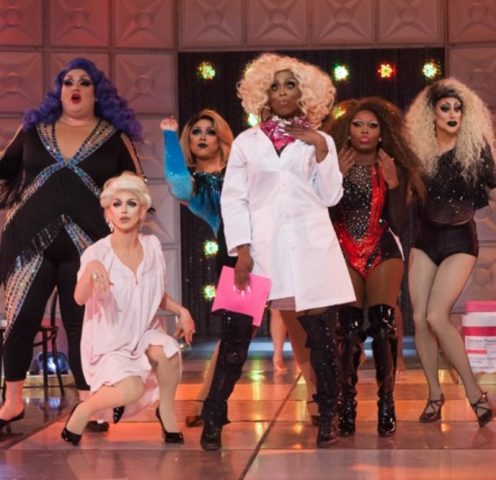 Following the elimination, we got our first true taste of drama. Calling back to Aquaria‘s copycat allegations towards Miz Cracker, The Vixen instagates a fight between the two that both of them clearly don’t want. Part of me appreciates The Vixen for being real and for holding Aquaria accountable for what she was saying behind the scenes, but mostly it just came off as a case of forced drama.

This week the mini-challenge was an extended ho-down dance off featuring Bravo’s Andy Cohen, who apparently loves country music. The girls only have 20 minutes to transform into their country selves and just like the Old Lady challenge and the Drag in the Dark challenge in the past, everyone looks a mess. After an extended dance off, The Vixen and Asia O’Hara are named the winners.

The main challenge this week is yet another musical, following in the footsteps of some truly exciting musical challenges of seasons’ past. From the Kardashian musical to the HERstory of The World musical, these challenges do a good job of showcasing talent and highlighting weaknesses so the queens really need to bring it. As the winners of the mini-challenge, Vixen and Asia are named team captains and asked to choose their teams. Eureka is the last chosen and the general reasoning seems to be that she talks too much. And right off the bat, you can see that Asia and Eureka are already butting heads.

READ NOW: The Chicago Drag Scene is Coming for New York and LA
When it comes to the rehearsals, we’re treated with a guest appearance by Drag Race alum Alyssa Edwards who’s there to bring out the [tongue pop] in each of the girls’ performance. It really is one of the most entertaining rehearsals we’ve ever seen and I hope they keep Alyssa for all future choreo on the show.

Now let’s talk about the musical itself… PharmaRusical? Really? Even the queens are thrown off by the theme. Out of all the possible themes, why pharmaceutical medication? Well, either way the queens turned it out, giving us moves, splits and gaggetry. But of course, there were some that didn’t cut it. Eureka clearly didn’t know the words and I assume her anxieties about hurting herself again affected her performance greatly. Kalorie Karbdashian found herself disappearing into the crowd of talented queens and as well know, to be forgettable is probably the worst thing that can happen on this competition.

This week on the runway the queens were asked to serve their “Best Drag” and to be honest, didn’t seem a little early to be giving up your best drag? It’s only week two! And it didn’t seem like a lot of the queens actually presented their best looks. In the end, The Vixen was named this week’s winner and Eureka and Kalorie found themselves in the bottom.

The Lowlight: All the bodysuits! Kimo-no-you-betta-don’t!

This week, our bottom two take on The Emotions’ “Best Of My Love.” Both of these queens tried it, but Eureka has that fire and passion that Kalorie just can’t muster. She’s a good queen, but maybe she just needed another year to cook. And in the end, Ru sees this and sends Kalorie on her way home.