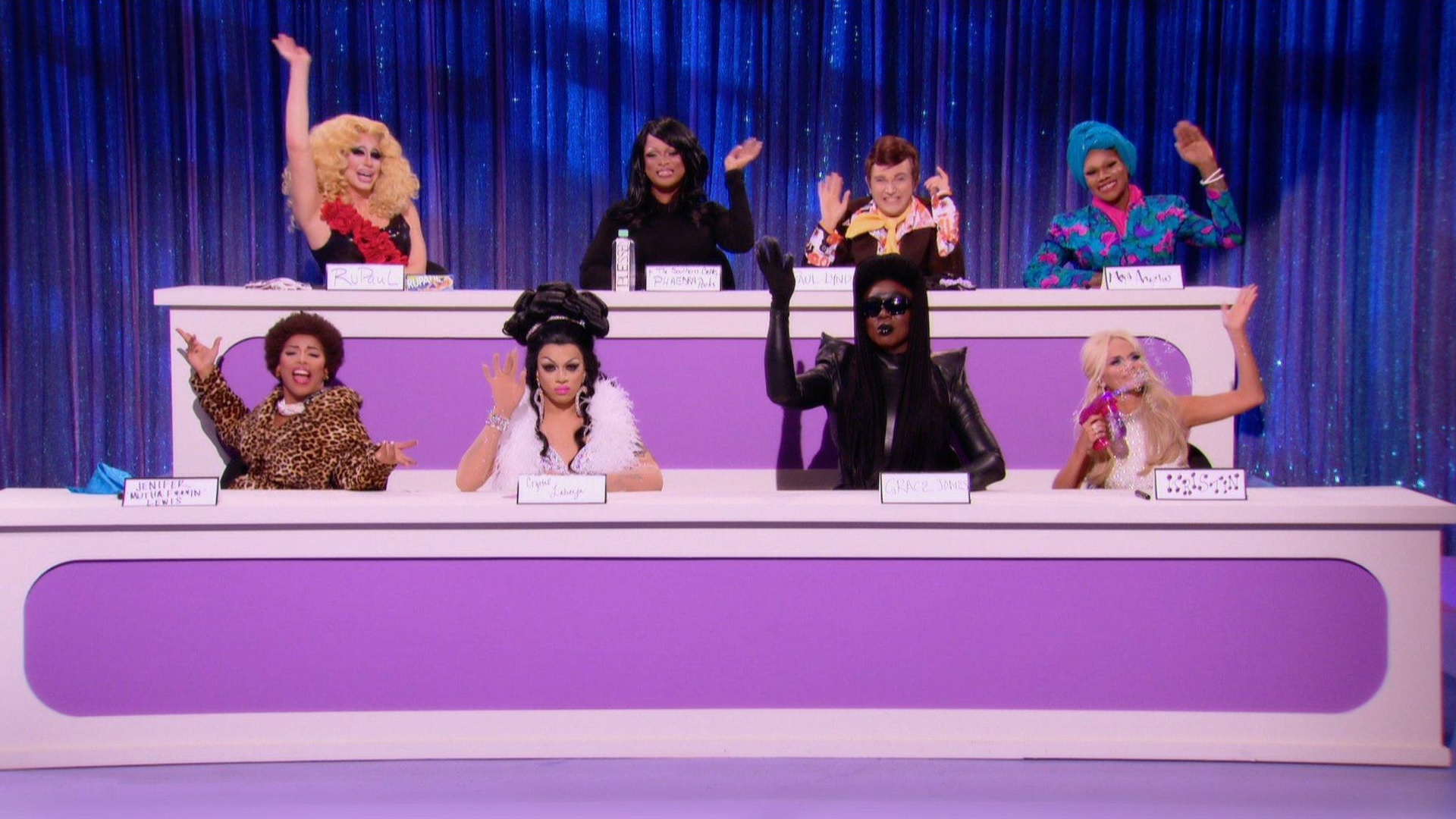 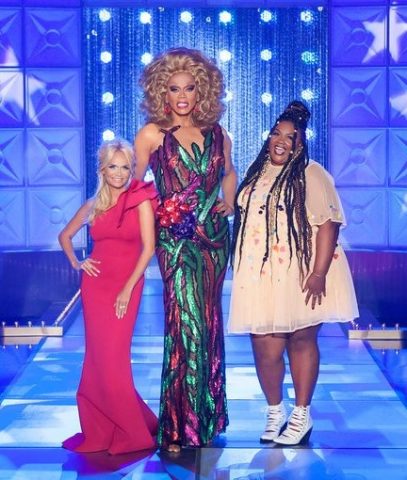 The day has finally come! It’s SNATCH GAME… All Stars Edition! As Shangela puts it, the Snatch Game episode is usually what separates the CANS from the CANNOTS, a hard fact for some of our qweens this week.

At the top of the show, we get another helping of drama surrounding the lipstick message. After being eliminated, Milk left a loving message saying, “Love you guys, but ya’ll know this is bogus.” There’s something in the lipstick this year and it’ll be interesting to see who much shadier these messages will get.

And the drama doesn’t stop there, next Shangela and Trixie Mattel get into after after Shang finds a message from Thorgy Thor calling Shangela a “Shady Bitch.” I feel like we haven’t seen tension like this in years and to be honest, I’m here for it.

Like I said above, the name of the game this week is Snatch and the qweens are treated to a Lisa Kudrow-esque visit from Marc Jacobs who is there to… um, I guess offer up his opinions of the qweens’ Snatch Game characters in the work room?

Ru and Marc make there way to each qween to get a taste of what’s to come in the challenge. Shangela reveals that she plans on doing the pay-per-call psychic Miss Cleo with a hilariously horrible accent that Ru identifies as a little Irish-sounding.

On the set, we’re joined by Michelle Visage and Carson Kressley, as well the surprise addition of Kristin Chenoweth to Snatch Game qweens! 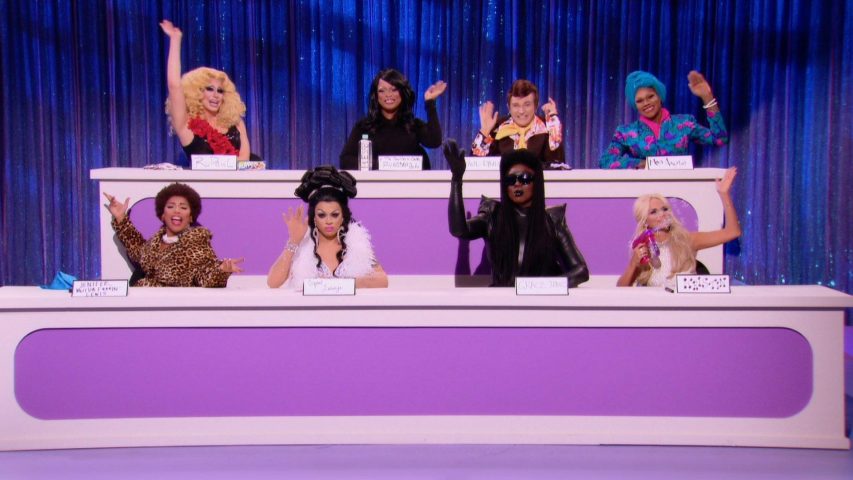 Trixie Mattel as RuPaul: It seemed like the perfect choice, we’ve seen Trixie do a hilarious RuPaul on her Youtube show “UNHhhh,” but the only joke to land is her first about buying Ru’s album on itunes and even that one wasn’t that amazing. So many cringe-worthy moments.

Kennedy Davenport as Phaedra Parks: Kennedy’s impression of the Real Housewives of Atlanta was pretty lackluster. She touched on Phaedra’s hypocritical lifestyle, but didn’t really go for it. Why didn’t she talk about her convict husband, her getting fired from Bravo or really anything about the Housewives show!?

BenDeLaCreme as Paul Lynde: Ben’s choice to do Bewitched’s flamboyant Uncle Arthur, was of course a brilliant one. The jokes were hilarious, the impersonation was dead-on and the banter between her and Kristen was just perfect. Ben is the clear standout of the challenge and in the competition.

Chi Chi DeVayne as Mya Angelou (aka Maya Angelou): Taking a hard turn left from Ben’s stellar Paul Lynde is Chi Chi’s Mya Angelou… MYA! That typo sets the tone for the rest of the game and is only topped in comfortableness by Chi Chi inability to answer “Why the caged bird sings.” Seriously?

Shangela as Jenifer Lewis: Shangela’s impersonation is the other strong character this week, but was it just me or did her Jenifer Lewis just seem like another version of the sassy character Shangela always plays? It wasn’t incredibly groundbreaking or creative, but she had jokes and her Chi Chi “Spelling Bee Champion” dig was perfect.

Aja as Crystal LaBeija: Aja continues to impress. Her stank face and answers made for consistent laughs. She wasn’t the best, but she was better than 80% of the rest of the qweens.

Bebe as Grace Jones: This was the biggest surprise of the game (besides Trixie’s epic fail and of course Kristen Chenoweth and). I was pretty sure Bebe was going to flop with a joke-less Grace Jones, but from the jump she showed that she (and Grace Jones) is more than just a “look.”

This week’s runway challenge is flowers… and the qweens look beautiful. But we all know the Snatch Game is the deciding factor. Trixie breaks down on the main stage, revealing that she’s incredibly anxious and scared of the competition.

Ben and Shangela are named the top two of the week, while Kennedy, Chi Chi and Trixie find themselves in the bottom. Backstage, Trixie and Shangela have an uncomfortable chat and Trixie pleads her case. It would be petty of Shangela to kick her out over the Thorgy note, but this may be her only chance to knock Trixie out of the competition. Chi Chi tells Ben to just be fair, she knows she’s been in the bottom more than anyone and she doesn’t want to be the Roxxy Andrews of the season.

This week, our top two take on Katy Perry’s “I Kissed A Girl.” It’s a fun lip sync, but you can tell Ben is trying to be interactive with Shangela and either she’s not really having it or they didn’t choreograph it well. In the end, both  is named winners and they both send Chi Chi home, but not until Shangela plays up the possibility of sending Trixie home. What did you guys think about this week’s episode? Who was your favorite Snatch? Are you Team Trixie or Team Shangie? Let us know your thoughts in the comments!